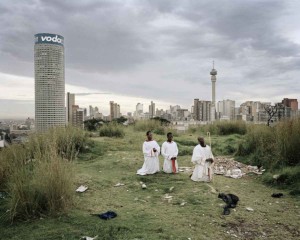 Ponte City (Steidl, 2014) is the product of a six-year collaboration with the British artist Patrick Waterhouse. From 2008 to 2013, Mikhael Subotzky and Patrick Waterhouse photographed Ponte City, this cylinder building of 54 floors in Johannesburg, deserted by white during the first race riots, and delivered to gangs, prostitution and poverty. In a sociological approach, they give to this story a profoundly human vision. This project focuses a single 54-story building that dominates the Johannesburg skyline. The building is cast as the central character in a myriad of interweaving narratives that, through photographs, commissioned texts, historical documents, and urban myths, chart the convoluted histories of both the building and Johannesburg itself. 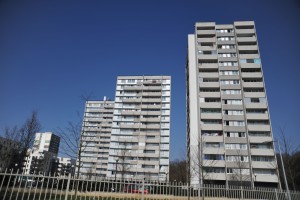 Project : another glance at Seine Saint-Denis

Based on the initial project of Ponte City in Johannesburg, artists have proposed an adaptation to the particular context of a symbolic city of Seine-Saint-Denis to create an unexpected link to the challenges of COP21 on “better living together” and “consume differently”.

Fifteen youth volunteers of the city would participate in a photography workshop that will follow the same protocol as Ponte City: meet the inhabitants of the buildings in the city and offer them to photograph them in front of the door entrance of their apartment, in front of their window (the “real” window), in front of their TV or computer (“virtual” window). Each participating family would receive a Little Sun from Olafur Eliasson, which will allow them to change their consumption behaviour of domestic lighting, while inviting them to suspend Little Sun to their window, as a sign of participation to the photographic project and the collective movement, visible throughout the city at night. The photographs will be exhibited on site in schools. The participation of the 2 cities to the Little Sun project may allow not only to contribute to apprehend lighting differently but also be a form of solidarity with developing countries without access to electricity, part of the Little Sun initiative: new energy North to South.

The project, which has not been finalized on time for COP21, could be realized in the short future, given interest of local authorities and intention to put culture at the core of the city there.