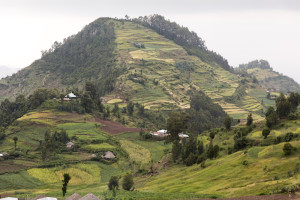 Wof Washa is Ethiopia’s oldest state forest and the last remnant forest in the region with a remarkable number of common, rare and endemic plant species and wild birds and animals. Higher temperatures, however, are increasing droughts and variable rainfall in Ethiopia. Climate change, deforestation and poverty are fuelling its demise; for example, 10% of the forest was destroyed in just 9 years (1992-2003) and 60 species of plants (4 being endemic to Wof Washa) have been lost since 1995. The communities in and around Wof Washa live in chronic poverty. The Wof Washa Forest project is protecting & restoring the forest by training & transferring over 6 000 hectares to forest users cooperatives to act as forest guardians. 67 non-timber forest micro-enterprises have been formed, comprising 968 members: micro-enterprise income has increased household income by 15% so far. Forest users will also learn how to diversify and increase their incomes by selling sustainable tree products, such as forest honey and fruits, thus reducing deforestation and increasing their resilience to climate change.