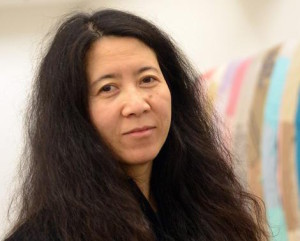 Yin Xiuzhen, born in 1963 in Beijing, People’s Republic of China, lives and works in Beijing 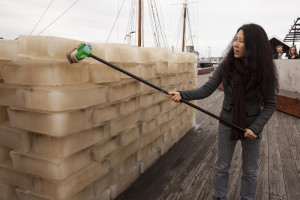 Yin Xiuzhen’s work suggests how progress and globalization threaten to engulf the individual and history. Through reused objects, performances and installations, it seeks to question the impact of technology and industrialization on our lives and on Nature.
By utilizing recycled materials such as sculptural documents of memory, she seeks to personalize objects and allude to the lives of specific individuals, which are often neglected in the drive toward excessive urbanization, rapid modern development and the growing global economy. The artist explains, “In a rapidly changing China, ‘memory’ seems to vanish more quickly than everything else. That’s why preserving memory has become an alternative way of life.”

She is a graduate of the Beijing Normal University 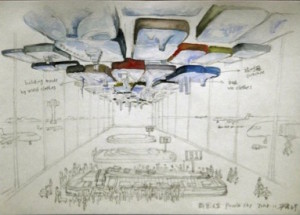 20 open suitcases covered with used clothes modelling the “People’s Parliaments” of 20 Capital Cities, would be suspended from the ceiling of one Terminal at Charles de Gaulle airport. The clothes of these “recycled cities,” blue to represent the sky, will be collected mainly through embassies or their cultural institutes in Paris with Next Textiles Association, one of the expert clothes recycling companies in France. Voluntary donors are citizens, anonymous or not, of 20 nations combining members of “G20″, the 20 most powerful nations, and representatives of the nations most affected by climate migrations and climate change (“V20″ for “Vulnerable 20″, created in October 2015). China is both a member of the G20 and among the 20 nations most affected by climate migrations. The work is a call to United Nations to build this new common horizon for COP21 in Paris.

Given the complexity of the clothes gathering and production process, the piece could be presented in a different venue after COP21.