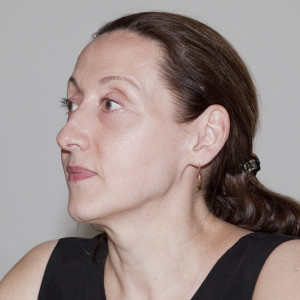 Vera Lutter, born in 1960 in Kaiserslautern, Germany, lives and works in New York

Vera Lutter develops a direct and monumental approach to photography: installing containers transformed into camera obscura in industrial sites, she captures in real-time light progression on these places. The photograph becomes the imprint of the passage of time. When the image is developed – after an exposure process of several hours, days or weeks – it is a black and white negative assuming precise yet mirage-like perspectives. By showing familiar venues like Venetian architecture, urban sites of Manhattan or Egypt’s great pyramids, the images are immediately recognizable, however the inversion of tones and the passage of time captured induce uncanny presences that invite a closer observation.

Vera Lutter is a graduate of School of Visual Arts, New York. 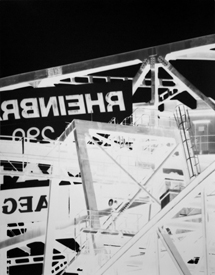 The quadriptych Rheinbraun in the collections of the Centre Pompidou, created in 2006, evokes the extraction of coal, specifically lignite, in Germany. This energy source, considered the most “dirty”, requires moving massive amounts of soil to reach the veins, up to displacement of entire villages.

« Near the rural town of Hambach, Germany, the energy company RWE (Rheinisch Westfälische Energiewerke) – formerly Rheinbraun – is now harvesting coal 300 meters beneath the topsoil. […] This process destroys the fragile structure of naturally layered soils and root systems turning the mine into an enormous mud pit during rainfall, and in the dry summer months, into a desert-like, infernal cloud of dust. All vegetation has disappeared. The landscape is both devastated and redesigned.

Lutter’s images of the Rheinbraun mine explore both the capabilities of an industrialized civilization and the place where such efforts culminate in ruin. Working with a forty foot shipping container as a camera obscura, her photographs reflect the immensity of this undertaking. »

Rheinbraun VIII : donation of the artist for the Charity Sale Artists 4 Paris Climate 2015