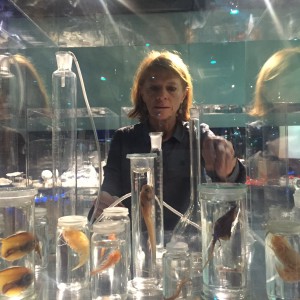 Janet Laurence, born in 1947 in Sydney, Australia, lives and works in Sydney

Janet Laurence during the visit of the collections at Museum National d’Histoire Naturel, Paris, May 2015  © entreprise contemporaine 2015 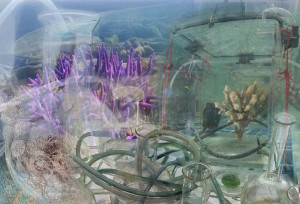 Janet Laurence has been at the forefront in Australian art in addressing our relationship to the natural world, with on-going themes of fragility, loss and the potential for healing. Working with science imagination, memory, and loss, Janet Laurence’s practice examines our physical, cultural and conflicting relationship to the natural world, creating immersive environments that navigate the interconnections between life forms. The artist explores what it might mean to heal, albeit metaphorically, the natural environment, fusing this sense of communal loss with a search for connection with powerful life forces.

She is a graduate of College of Fine Arts, University of New South Wales, Sydney

Deep Breathing – Resuscitation for the Reef 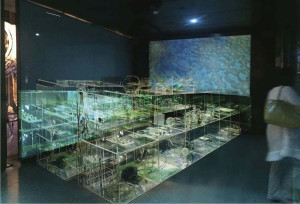 Creating the imaginative possibility for healing our marine world from consequences of global warming and human activity, with a focus on the symbol of the World Heritage Great Barrier Reef: this space represents a resuscitation unit, and reveals both the plight and suggests action.

From FIAC to COP21, this installation will be presented at the entrance of Grande Galerie de l’Evolution at Museum National d’Histoire Naturelle (MNHN), Paris, which has loaned specimens for its realization. A video will also be projected at the Tropical Aquarium of Palais de la Porte Dorée. The Australian Museum, which has also loaned specimens for the piece, will exhibit the work in 2016, and allowed the artist to visit its Lizard Island station in July 2015, where vital research for the future of corals are on going.