Pavel Pepperstein, born in 1966 in Moscow, Russian Federation, lives and works in Moscow

2015 Nominated for the Guerlain Prize 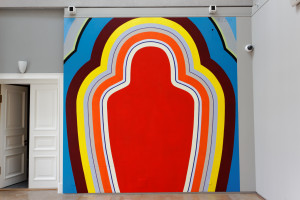 Awarded the prestigious Kandinsky Prize in 2014 for Russian Artist of the Year. Nominated for the 2015 Guerlain Contemporary Drawing Prize. Pavel Pepperstein is a prolific artist and also best-selling novelist, critic, rapper, and Film Director. He utilises the pure forms of Suprematism to give them a poetic simplicity, serious or funny, and mixes stories of science fiction with political overtones. In recent years, the work of Pavel Pepperstein has featured in various group exhibitions and solo shows such as Landscapes of the future, Russia Pavilion, Venice Biennale (2009). Pepperstein’s art has been exhibited in museums and galleries around the world, including The Louvre in Paris. His paintings, drawings and installations can be found in the Tretyakov State Gallery in Moscow, the Russian State Museum in St Petersburg, the George Pompidou Centre in Paris, the Deutsche Bank Collection, Albertina Museum in Vienna, Kunstmuseum in Basel and in many public and private collections both in Russia and abroad. He is a graduate of the Academy of Fine Arts in Prague. 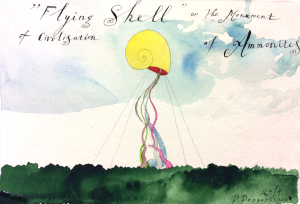 “ In 2066 a group of aerospace engineers working under the direction of a certain E., successfully launched production of the so-called “cloud-planes” – and after a while all civilian passenger flights were switched over to the new technology.

[…] The passenger module is composed of a jelly-like, transparent, but exceptionally strong material, permeated with nano-capillaries. The form of the module changes in flight, according to the dynamics of the air currents, but it most often resembles a spindle-shaped cloud, with elements of a flying tree seed. Left all alone in the sky, the passenger module goes into free fall through the air, descending to the ground very slowly. The material for the passenger module was synthesized in 2022. This material is so ductile and strong that it allows the module (the so-called “snot”) to land in the sea or on a mountain crest. And even if the “snot cloud” descends onto sharp rocks, no mountain peak can puncture it, and all the passengers wait imperturbably for a rescue vehicle that will take the “cloud” in tow. […] ”

Pavel Peppertein creates a Science Fiction Novel that travellers can download and read during their flight, dreaming about futuristic ways of transportation, after having discovered a surprising sculpture at Charles de Gaulle airport, turning the dream into “almost” reality: