Gideon Mendel, born in 1959 in Johannesburg, South Africa, lives and works in London

After studying Psychology and African History at the University of Cape Town, Gideon Mendel began photographing in the 1980s during the final years of apartheid. It was his work as a ‘struggle photographer’ at this time that first brought his work to global attention.

In the early 1990s he moved to London, from where he has continued to respond to social issues globally. One of the major focuses of his work soon became the issue of HIV/AIDS.

Since 2007, Mendel has been working on Drowning World, an art and advocacy project about flooding that is his personal response to climate change. This work has been noted for its unusual use of portraiture, as well as its combination of photography with video pieces.

Project : Drowning World, from 23 to 29 November in Paris

« Drowning World is my attempt to explore the effects of climate change in an intimate way, taking us beyond faceless statistics and into the individual experiences of its victims.

I began work on Drowning World in 2007 when I photographed two floods that occurred within weeks of each other, one in the UK and the other in India. I was deeply struck by the contrasting impacts of these floods, and the shared vulnerability that seemed to unite their victims.

Since then I have endeavored to visit flood zones around the world, travelling Haiti, Pakistan, Australia, Thailand, Nigeria, Germany, The Philippines, Bangladesh, Brazil, the USA and returning again to India and the UK recently in search of these commonalities and differences. 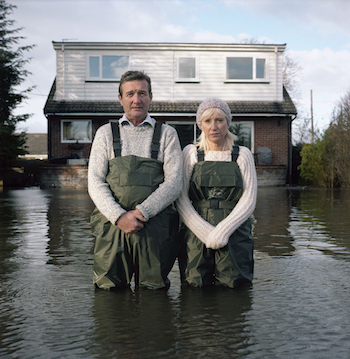 I choose to shoot the photographs on medium format film, using a set of very old Rolleiflex cameras. This is expensive and difficult to do while working under the most challenging of circumstances. But I believe that it gives the images a distinctive quality and also necessitates a formal rigor in my approach.

The flood is an ancient metaphor, found within the myths and legends of many cultures. It represents an overwhelming, destructive force that renders humanity powerless in its wake and leaves us seeking refuge. As global warming drives an increasing number of extreme flooding events each year, this message continues to resonate.”

The Parisian project has been brought to life thanks to the support of group Allianz.

Jacques Richier, CEO of Allianz France : “Last October, we had to face a major weather event
in south-eastern France. This is the intimate look beyond insurance statistics, which make the
photographs of Gideon Mendel so intense. Events of this nature will be repeated. We must
learn from it. We need an ambitious climate action. ”

Jean-Charles Decaux, JCDecaux General Co-Director “For over 50 years, JCDecaux’s
mission is to experience art in the city and make it accessible to the greatest number. We are
delighted to stage in Paris the “Drowning World” exhibition and contribute to public
awareness of the consequences of global warming.”

13/11/15 / The Gardian: Extreme weather, human error and why the world floods (John Vidal)

A final look at the #drowningworld public installation that is part of the @travelphotojaipur festival. I am on my way home now after a great #jaipur experience #india. #gideonmendel #travelphotojaipur

Our climate photo of the week: @gideonmendel shows victims of flooding in Brazil http://t.co/qnxbaQPky0 pic.twitter.com/mUIAzBH60A